Madeleine de Scudéry (1607-1701) was one of the most prominent cultural and literary figures in seventeenth-century France. She is most well known for her voluminous novels, written collaboratively in her salon and published under her brother George’s name. My research on Madeleine de Scudéry focuses on her last set of publications, commonly referred to as the Conversations (1680-1692). Understudied and underappreciated by modern scholars, these texts make crucial interventions into seventeenth-century literature, history and philosophy. A searchable digital version of these texts does not yet exist. This project involves the digitization of the 10-volume collection of Madeleine de Scudéry’s Conversations in a format that would allow for textual mining and analysis per “conversation” and per volume. 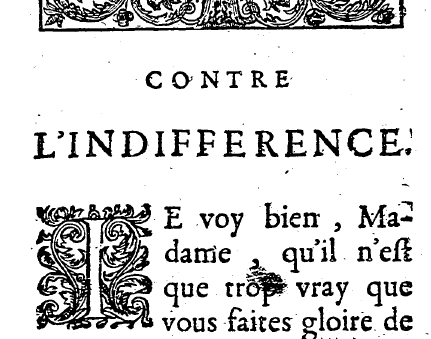 Ideally, this project would involve students from both the departments of French and Francophone studies and Computer Science. The work need not be limited to College of Wooster students, as we would welcome collaboration from other students and departments in the Ohio Five. Students would be responsible, in a first phase, for keying in and proofreading text from volumes I and II from 1680. The second phase would occur during the Fall 2015 course, FREN 322: Seeing is Believing? Students in this course would use the digital form of the text to search for the location and frequency of key words. The goal of this work would be to begin to make some generalizations about which people, places, ideas and/or themes appear to be most important in these volumes, as well as in which contexts. We would also seek to discover how quantity (word frequency) correlates (or not) to quality (What makes a person, place, word or idea important in a text? Multiple repetitions? Minimal repetitions? Context? Location? Formatting? etc.) Other possible student projects could include French and English-language summaries of chapters and text sections, textual annotations, and comparisons with other contemporary works that have been digitized elsewhere.
Eventually, we would like to digitize all ten volumes of Conversations. Long-term, this work would serve as the foundation of a larger project, whose goal would be the creation of a website (modeled on www.artamene.org), which would contain the searchable text as well as reproductions of the frontispieces for each 2-volume set with information on engravers and the history of their production. The site would also include summaries of major text sections, a bibliography of Scudéry’s work, and secondary sources on the same, as well as links to important websites related to Scudéry studies.

Update: Phase two of the project seeks to transcribe the remaining 8 volumes, as well as to create a second,
more accurate set of textual data derived from the first two volumes to preserve the integrity and
homogeneity of the full set.