Today, I am presenting on a panel with Ohio Five folks at a digital scholarship colloquium at the Kelvin Smith Center at Case Western Reserve University in Cleveland. Carol Lasser (OBE), John Krygier (OWU), Katie Holt (WOO), and Jon Breitenbucher (WOO) are talking about what they’re doing in their courses, while I’m providing some greater context for the work we’re doing in the Five Colleges. Here’s the abstract that we submitted, with a link to PDF version of our collected slides below that.

“Building to Scale: Shaping Digital Coursework with Tools and Partnerships”

Building on a prior three-year initiative to create curricular digital collections, the libraries of the Five Colleges of Ohio are one year into a new three-year program to partner with faculty in larger, more ambitious curricular digital projects. Under the new initiative we continue to develop faculty- and student-curated curricular collections, but the focus has broadened from thinking of the digital as a presentational medium—from digitization—to thinking with the digital as a pedagogical method. Many of these new projects have more moving parts, and we find ourselves building networks of technological and human resources as we navigate our digital turn.

I propose a panel in which I speak briefly and broadly, as the Ohio Five’s Mellon Digital Scholar, about consortial efforts to build these networks, thus framing our panelists’ discussions of their projects and partnerships. Oberlin College’s Carol Lasser will discuss her collaboration with college archivist Ken Grossi as they led students from her course on First Wave American Feminism into the archives to encounter primary resources and the questions arising from their representation both historical and digital. Second, working (and presenting) with Jon Breitenbucher, Director of Educational Technology, College of Wooster’s Katie Holt will discuss how they are exploring mapping both in and of identity formation by asking students to think holistically about “digital citizenship.” Ohio Wesleyan’s Geography professor John Krygier is also asking his students to think about notions of place in a project that has linked communities at OWU, Denison, Ohio State, and the City of Columbus. This team is building a dynamic GIS platform that will allow students to negotiate and interrogate modern spaces in Columbus, OH by bringing digitized historical real estate maps into the field. 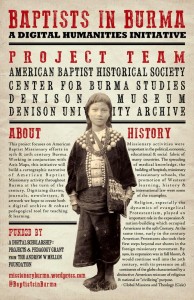 A collaborative team led by between Denison Humanities Librarian Josh Finnell, Museum Director Sherry Harlacher, and Assistant Professor of Religion Jonathan Moore will create a digital map that will trace Denison’s missionary activity through 19th- and 20th-century Burma. This large scale project exemplifies many levels of colloaboration, not only at the local, interdepartmental level, but nationally as well, drawing on resources from the American Baptists Historical Society, the Yale Divinity School, and the Center for Burma studies. Moreover, the project promises significant involvement of undergraduate student specialists who are collecting and curating materials from these various locales as part of assistantships and coursework.

The idea here is that every other month, on or around the first, we’ll send out an newsletter with eight bits of news (see what I did there). This will be one way of keeping everyone in touch with some of the things that we’re doing in the Ohio Five with digital scholarship and pedagogy.

I plan to write a little more about using MailChimp for our newsletter. It’s a great interface that (so far) seems a perfect fit for our academic purposes. The free account is doing the job, as it should for users in higher ed. Stay tuned for that (or you can follow me on Twitter; I’m sure to tweet a link to the post when it drops.)

On 7 October, Oberlin’s News Center featured an article about Oberlin professor Laurie McMillin’s newly instituted travel journal, Away. In her article, Rosalind Black writes about the genesis of the project, as well as the way in which in features Oberlin students from the past, the present, and — as potential contributors to the journal — the future. 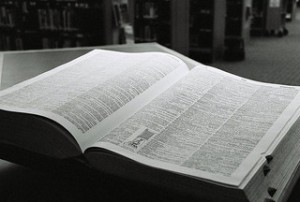 Conversations that center on defining our digital practices (or communities, or disciplines) are so last decade.

In his now-canonical “What Is Digital Humanities and What’s It Doing in English Departments?” (2010), Matthew Kirschenbaum noted that “‘What is digital humanities?’ essays like this one are already genre pieces.” By 2012, tucked in the comments of Ted Underwood’s post on How Everyone Gets to Claim They Do DH (2012), Ryan Shaw could ensure his students that “one of the few things that unites digital humanists of all stripes” is that they grow “thoroughly sick of discussing how to define the digital humanities.” The line had been crossed. But I hasten to add that it’s out of these discussions, “genre pieces,” moments of Defining Digital Humanities that Julianne Nyhan, Melissa Terras, and Edward Vanhoutte have curated an admirable DH primer that was published just a few months ago. This is to say that, because of the proliferation of definition-centered conversations over the last decade–because there are many fine examples of this brand of intellectual exploration–we’re now able to use them as a way to reflect, frame, and project our notions of “digital humanities.”

It’s with this arc in mind that I proposed a panel on Defining Digital Liberal Arts for MLA 2015. My position in the Ohio Five requires a certain amount of DH outreach, which requires a kind of shorthand for talking about DH. My experiences as a digital humanist, however, can only help frame discrete parts of this brave new world’s digital discourses that are at once distant and familiar. The digital scholarship that I’ve seen is somehow more widely inclusive and differently particular.

Last spring, as a way of suggesting avenues into a DH “movement,” William Pannapacker suggested that we Stop Calling it Digital Humanities. Digital liberal arts (DLA), he notes, is a “more inclusive” term for the kind of work that we might associate with “digital humanities.” Especially in liberal education where the interdisciplinarity of students’ interests is expected and advised, it’s important to bring non-humanists into the conversation, both for their disciplinary specialties and their digital experience. It is this key of inclusion that leads Raphael Alvarado to follow Pannapacker with the explicit assertion to Start Calling it Digital Liberal Arts. Not only is “digital humanities” a “social category” (rather than an ontological one, a distinction Alvarado works out elsewhere), but, perhaps more to the immediate point, “DLA involves more than a cluster of disciplines [e.g. humanities] can encompass; it involves rethinking the curriculum as a whole, the spaces within which education happens, and the careers of students who pass through them both.”

When I invite, well, anyone who’s interested to think with me about “Defining Digital Liberal Arts” it is, in part, so that I might develop a shorthand useful to me in my position as a “Digital Scholar.” It’s practical and personal: new to this landscape, I need a way of orienting myself and any others in my consortium interested in doing digital work. On the other hand, though, thinking through these issues together and publicly can and should challenge the very notion of a shorthand. Not simply an exercise in defining our terms, it is rather an invitation to engage in the kind of rethinking to which Alvarado points. It is not an invitation invested in circumscribing a discursive space for “digital liberal arts,” but in asking how a digital, liberal education should equip our undergraduate students for their post-baccalaureate lives. If DLA is to be a the thread, how is it dyed and woven to form an insitutional tapestry?

This post, like the MLA CFP itself, is in some sense an effort to crowdsource answers to my own questions about the digital in the liberal arts. My sense, though, is that they’re not easy questions. Indeed, as with our understanding of “digital humanities,” how we see DLA will change over time. Both Pannapacker and Alvarado suggest that liberal arts colleges and universities may be nimble enough to accommodate these shifts in meaningful ways; an agile curriculum development, perhaps. For starters, though, I wonder how we see “DLA” right now? And whether or not we should see it at all? Is the term a useful way of opening this conversation or, conversely, does it close us off by suggesting some kind of definitional authority that doesn’t actually exist?

Don’t worry if you need some time to think about it. Just send me a abstract. I’ll meet you in Vancouver next January and we’ll talk some more.

One of the great things about my job as the Mellon Digital Scholar for The Five Colleges of Ohio is that there is never a dull moment. Having spent the first semester getting to know the different campuses and laying some of the nuts & bolts groundwork for faculty projects, I’m now in the thick of working with faculty, librarians, and instructional technologists on specific digital projects. Because there’s never a dull moment, I’ll visit this space from time to time to share some of these moments with interested readers. I plan to write on topics that range from the (seemingly) mundane world of workflows, to the (potentially) more-engaging questions of what it means to “do” digital scholarship in a liberal arts setting. Think of these as reports from both the ground-level and the bird’s eye, both the how and the why of digital scholarship.

I don’t yet know what my regular posting date(s) will be, as I’m currently wearing my digital project manager’s hat through much of the workday. Until I do, you might check back from time to time, and you can always follow me @dr_heil for updates on #TheOH5.

Welcome to the very first iteration of the space for the Ohio Five’s new Mellon-funded initiative, Digital Scholarship: Projects & Pedagogy. This is the barest of bare-bones sites at this point, but I want you to know that you’re in the right place! This will be the space where we feature projects that faculty and students are working on, post information about digital scholarship and the Ohio Five’s new Mellon Digital Scholar, and where we post information about the grant and our micro-granting process.  (Only OH5 folks are eligible for the microgrants: sorry rest-of-the-internets!).

Our goal with Projects & Pedagogy is to think, not only about digital collections, but about how we in The Five Colleges can use “the digital” to approach research questions differently. More importantly, of course, we’re interested in the ways that digital tools, modes, and methodologies can be folded into our teaching in fundamental ways.

Please, come back as we’ll be filling this space with project descriptions as they roll in. In the near term–and while we wait for new projects to grow–we’ll populate the site with some of the collections that faculty, students, and librarians built in the recently completed Next Generation Library initiative.